There is hardly a flute player in the United Kingdom or America, who doesn’t owe a great deal to Geoffrey Gilbert
for his teaching, his playing, or his influence in one way or the other. 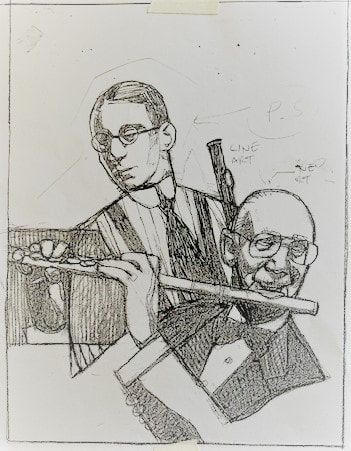 With Geoffrey Gilbert’s untimely death in May of 1989, I recognized the importance of sharing the work—to pass on his teaching and to honor his memory. With overwhelming encouragement from colleagues and Gilbert students, I first published The Gilbert Legacy: Methods, Exercises, and Techniques for the Flutist in 1990.

In 2021, as work for this fourth printing progressed, it became clear that major revisions were needed—editing, updating—essentially a facelift for a book that took shape between 1982 and 1987. As I worked on the revisions, questions arose that called for additional research, and I discovered several glaring inconsistencies in Gilbert’s biographical details. One of my primary goals in producing this “revised and expanded” edition of The Gilbert Legacy is to correct any misinformation about his professional life.

New and amended materials found in the front of this book include the dedication, an epigraph, two Forewords—the first from Monya Gilbert and the second from Trevor Wye, a Preface, and a revised Introduction.

Chapter 1, "The Life of Geoffrey Gilbert," broadens the scope of the biographical information about Gilbert’s life with attention to recent research. Chapter 2, originally entitled “Introduction to Geoffrey Gilbert’s Teaching," has been expanded under a new heading, "Geoffrey Gilbert’s Approach to Teaching: A Philosophy of Compassion." New material included in this edition that pertain to Gilbert’s teaching concepts, methods, and practice techniques are presented as additional Appendices.
​
The Gilbert Legacy provides a compendium of information suited to intermediate and advanced players seeking a natural and logical approach to playing the flute. Gilbert’s core fundamentals and beginning concepts have proven beneficial to flutists of all ages. His concise explanations along with his positive and insightful pedagogy are effective for all flutists who wish to improve. Through further preservation and clarification of Geoffrey Gilbert’s teaching methods in this new edition, The Gilbert Legacy continues to sustain his enduring legacy.
​
—Angeleita Floyd, November 2022--

Submit the form below to be notified when the revised and expanded edition is available for pre-order.